This post may contain affiliate links. Additionally, remember that I am not a doctor and any health statements must be verified by your doctor. Read my full disclosure policy here.

When I went to bed Tuesday night, I had hoped that I would have an OK day on Wednesday.

There is something about becoming an adult that seems to lock the door to having magical birthdays.

When does the magic stop and adulthood begin? It began when I wasn’t in any type of school. As long as I was in school, I was surrounded by people who would say, “Happy Birthday!” all day long. As a youngster, 30 of my classmates became my best friend for the day because I gave them a sugar high, with cupcakes and reason for the teacher to dismiss education for an hour. When I taught middle school and kindergarten, I received notes, cards, flowers, Starbucks, etc.
But in the confines of my own home, I am at the mercy of other moms to remember my birthday amidst their own loud chaos, laundry, and appointments. Two year old’s don’t have an Outlook Calendar, nor a Palm Pilot to ding at them reminding them to scream, “Happy Birthday, Mommy.” The husband goes to work. And my mom isn’t supposed to coddle me anymore. Life isn’t about ME, though I sometimes act like it is.
Despite myself, God gave me magic yesterday. I had a magical adult birthday. The inch thick dust on my TV cabinet became Pixie Dust. Praise God, I hadn’t cleaned in awhile.
I woke up to my handsome husband and eldest son bringing me breakfast in bed–strawberries, cheese eggs, granola, and chai. The kiddos were even reasonably happy that morning! Upon arriving downstairs, the Hottie Husband had left me two gift cards to redeem that day. I was blessed by singing angels on my answering machine, a yellow rosebush, and a Facebook Wall splattered with birthday messages. I felt like a “cool cat.” I felt loved. I felt magic.
And that was only 10 AM.
My MIL (Mother-In-Law) arrived with coffee, flowers, and lunch. She basically shoved me out the door and wouldn’t let me lift a finger. My laundry was folded when I returned. She got us ready for a night out on the town. Love in action.

We actually made it to Hottie Husband’s office early and were able to surprise him. I think we surprised many of his co-workers, too. The entire office knew that the Granola Family was “in-the-house” (as Sid the Science Guy would say). My parents took us out to dinner to one of my favorite restaurants, PF Chang’s. I would show you a picture–but my meal didn’t photograph well.
Now, my parents were a bit excited about my birthday gift. I don’t know that I have ever seen them this giddy. I must admit their delight and joy at giving me this gift almost meant more to me than the gift. I say almost, because I don’t want them to take the gift

back. (That is my sister–she has a kid’s craft blog and sells stuff on ETSY.) 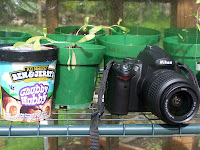 me introduce the gift, “Willow.”

Yes. My NEW camera has a name. I am officially wacky. Willow is a girl camera. She shall see life through my eyes, as the ONLY female in the house. (Mussoorie, the spayed dog, doesn’t count.)
Just to show you how powerful Willow is, I took p

ictures of the Hottie Hubby during last night’s power outage. You can’t even tell the lights aren’t on!
So, thank you to everyone for contributing to my Magical Adult Birthday. I was blessed beyond belief.
Watch out! Willow and I are on the lose now!

P.S. Thanks Mom and Dad! Thanks for the gift of life. It is fun to experience magical days. I am glad that you were there.

Jodi is married to her high school sweetheart. She blogs about fermentation, whole foods, homeschooling, essential oils, home-birthing, and gardening.

Curious about Essential Oils? When I first heard about them 13+ years ago, I wasn't sure what to think or where to find information. I've got you covered. Click on the image to learn about our oily journey!

After much research, we chose The Clean Bedroom for our mattress and our daughter's mattress!

Please join us as we #writetheword to further understand the importance of ending Bible poverty. Learn how to host your own #writetheword party.
Consider purchasing gifts that will impact a life.

Learn About Why These Are My FAV’s!